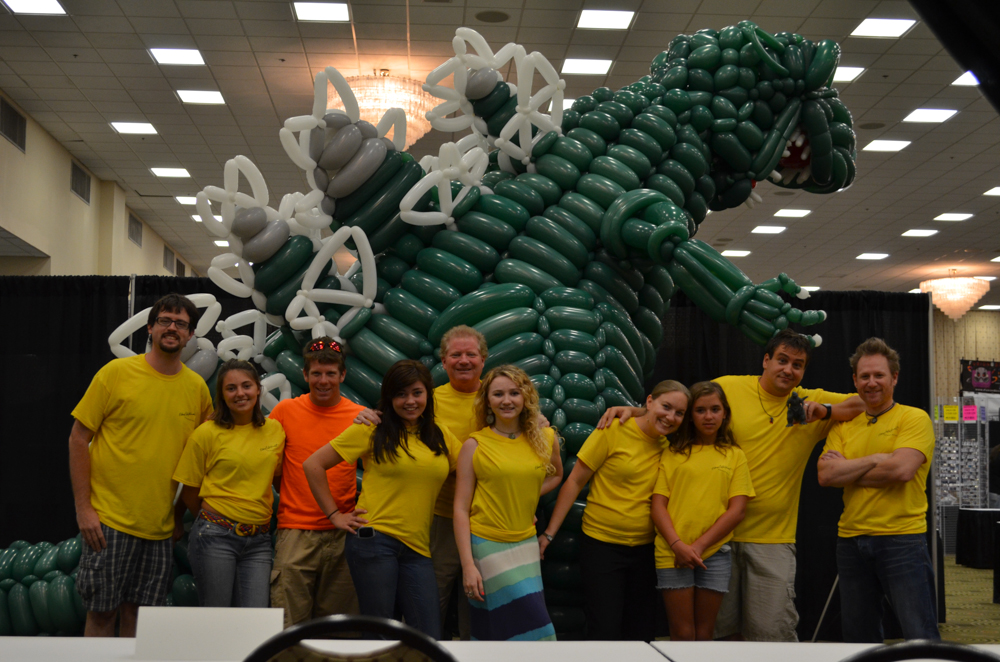 It promised to be one of our biggest and most amazing sculptures yet! The movie that is being celebrated with all this hub-bub…. Godzilla. 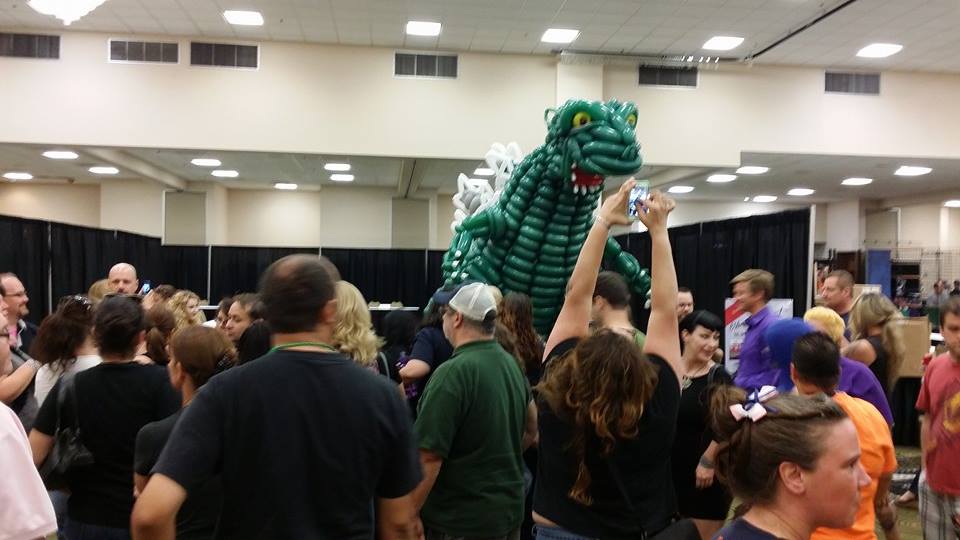 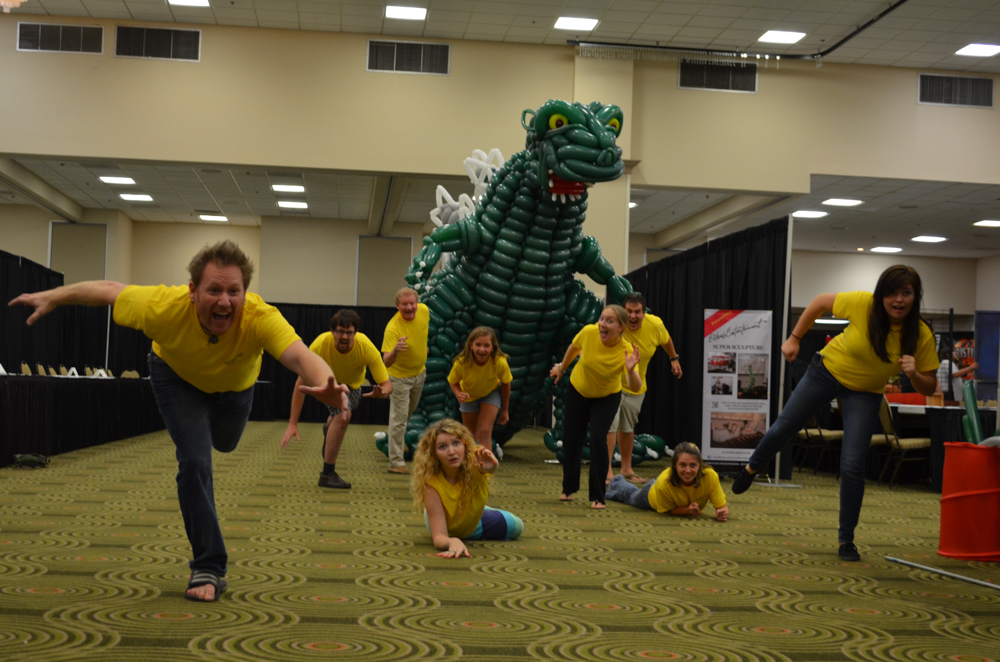 and many of the subsequent Godzilla movies were going to be there. Although there are several Godzilla conferences every year, these two being in attendance is very rare. That’s why we took several months to plan this guy and put together a great team, we wanted everything to be perfect.  It would have to be built in Orlando as there was no way to build this guy here in Naples and Fort Myers and then transport him.  All the balloon creation had to be built on site.  The project took 4 months of planning just to decide on the design.  Then with the execution, we brought in some of our fellow artists for help to make sure it could be finished in only one day.  So after 120 man hours and 2500 balloons, a monster was born.  Sixteen feet tall, twenty-three feet long, and looking mean!

Unfortunately, we had another event and had to leave the next morning, but the following day, before we left for our Masters of Magic show in Tampa, we thought we would just stop in to say hello and check on the sculpture. Each time they had hundreds of people in line and a several hour wait. Well, we were going to walk away, when one of the staff members pointed to us and said to Akira Takarada, the star of the 1954 Godzilla, “Those guys are the ones that made that.” (Our Godzilla creation had been right next to them for the convention)

Akira stopped what he was doing and had a huge smile on his face. He left the line and everyone and came up and gave us a huge bow and started telling us how much he loved it. Then he asked if it was okay if he got his picture with us! He asked someone to grab his camera out of his bag and we went in front of our creation. (Of course, we used our camera too.) He then instructed the person with his camera to take several shots from different angles. 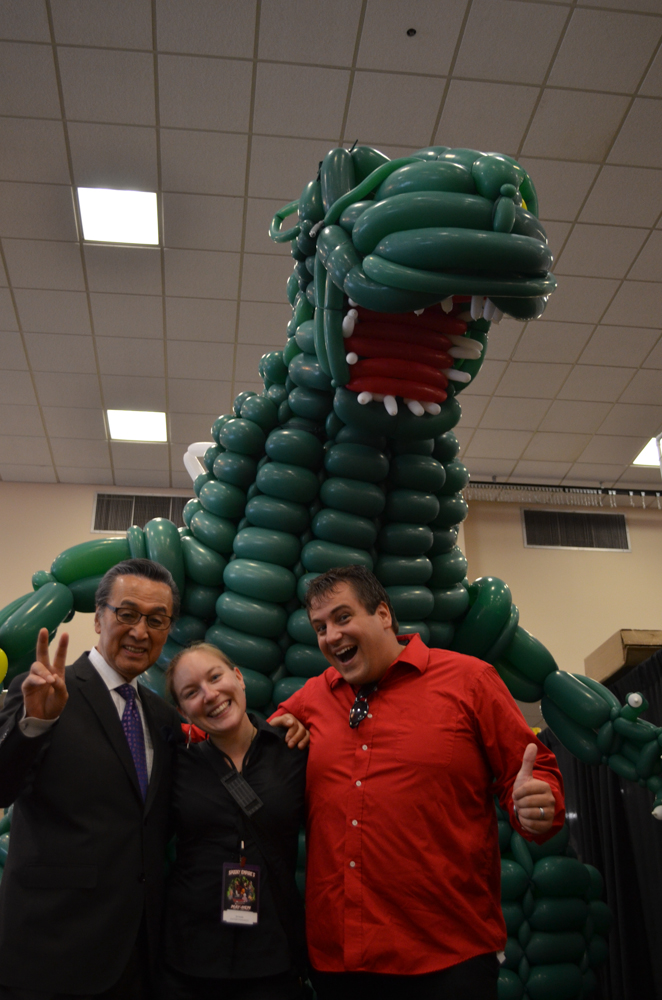 We then talked to him and Haruo Nakajima, the man in the original Godzilla suit, and they asked us to sign the blueprints. Then Akira said he wanted to give us a gift and took out a canvas, then he brought out an ink well and bamboo and began to draw on it. He drew the Japanese symbols of Gojira (Godzilla) and then signed it to us from him. He then did something really cool, instead of only his signature, he brought out his stamp with his family crest, the way they do official documents since signatures can be forged, and placed it on the canvas. He wanted a couple more pictures with us and Haruo with the sculpture and his gift to us.

Then he gave us his card and his email address and asked for ours. He proceeded to talk to us about an event in Japan that he wants us to come to and visit and build this!

Well, it took us about 4 months of planning to put everything together for this project, but I must say it was a success! One of the best days ever!

If you see our sculpture going around Facebook and Twitter the next few days, please tag us in it!

If you interested, here is a video we made telling of some of the behind the scenes of what goes into a Super Sculpture like this, it also shows some Easter Eggs in our past Super Sculptures.

Here is also a gallery of some pictures of the Godzilla build, including Haruo Nakajima, the man who wore the Godzilla suit in the 1954 movie and 13 Godzilla movies in front of it.